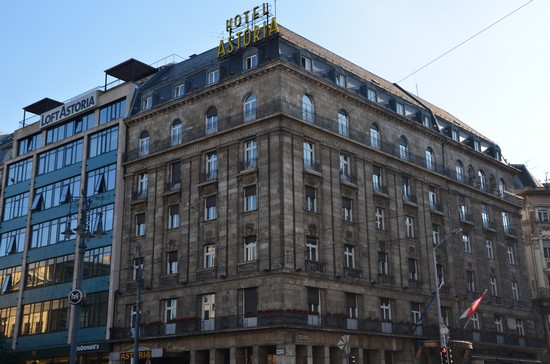 So, finally we’ve reached the end of our fun, relaxing, beery excursion around the best parts of Budapest, that has included bridges, squares, churches, fortresses, and much more along the way, as the beer bus meanders its way around this beautiful and diverse town that always manages to throw a new and fascinating experience at you when you least expect it. So sometimes it’s best to go with the flow and let the beer pour! And on the Budapest Beer Bus, we’ve got you covered!

Our last stop rounds us up at Budapest Astoria, which is the name of the hotel, as well as the intersection and metro station in its vicinity. The full name of the hotel is the Danubius Hotel Astoria, in a grand building over 100 years old, making it a traditional establishment that takes its patrons back to a past era. If you feel like experiencing a touch of Hungarian class after your beer bus tour, then why not visit the restaurant for some goulash washed down with a glass of local wine?

If you don’t quite feel like the Astoria, you will find you are in an excellent position to explore the city. Astoria is at the point where districts V, VII and VIII meet, so your options are various. District V is the commercial, financial and political centre of the city with two historical areas: Belváros or Inner City – the old town, and Leopold Town or Lipótváros. This area includes many excellent places to eat, such as the Michelin-star Onyx. Heading west from The Astoria takes us into District VIII, and old-fashioned part of town that has a number of museums and palaces, such as the National Museum and the Wenckheim Palace.

But if you’re looking to continue the party, then it could be a good idea to head north into District VII, the former Jewish quarter that has become more fashionable and hipster in recent years, and is home to the famous “ruin bars” of Budapest. These are a collection of bars in old industrial properties that have been refurbished to meet the demand for a generation that likes to take things back to basics.

Budapest always has much to offer, and the beer bus is a great way of getting started!.