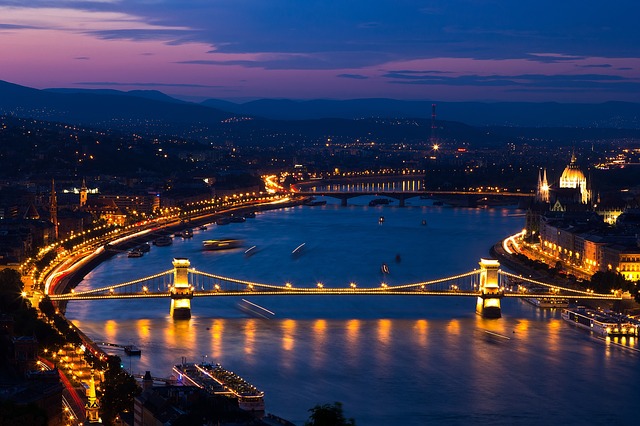 Budapest is a town of many fascinating and spectacular sights, and the best possible way of taking them all in is with a fun and adventurous tour bus company that transports you in style: in a cool and comfortable vehicle that provides you with Hungary’s drink of choice – beer! Beer Bus Budapest is a tour with a difference, and one you won’t forget!

One of those landmark sights of this fantastic town not to be missed is the iconic Chain Bridge, a beautiful 19th century suspension bridge that is locally seen as a symbol of the nation.

The bridge was built between 1840 and 1849, and is known in Hungarian as Széchenyi lánchíd, after Count István Széchenyi, who initiated its construction and is also held as a great national figure of the time. It was designed by the celebrated English engineer William Tierney Clark, who was especially well known at the time for his work on suspension bridges, and the Chain Bridge was widely acclaimed as an impressive engineering feat, and it quickly became a significant landmark of the city.

The bridge was especially important as being the first permanent bridge between the two towns of Buda and Pest. Before this there had been a so-called ‘ship bridge’ comprised of a number of wooden keels, but it needed to be rebuilt from time to time, and didn’t stand up too well in the icy weather. Crossings were also taxed, so all-in-all it wasn’t the best possible option. When the new suspension bridge was completed, local Magyars must have breathed a sigh of relief! Although in the years 1848-9 the country went through an uprising against the Habsberg empire, which was brutally supressed by the Austrians, and the bridge that had been years in construction narrowly escaped being exploded by the revolutionary side. When it was finally opened in November 1849, the ribbon was cut by the Austrian General Haynau, who had cruelly executed Hungarian leaders for their disobedience. So, this was unfortunately no moment of glory for Hungary.

Today the bridge remains an important part of Budapest’s cityscape, and a definite item on the agenda for all visitors to the city. Guests on the Beer Bus Budapest will find the Chain Bridge at stop number 4, as we pass from Pest to Buda.