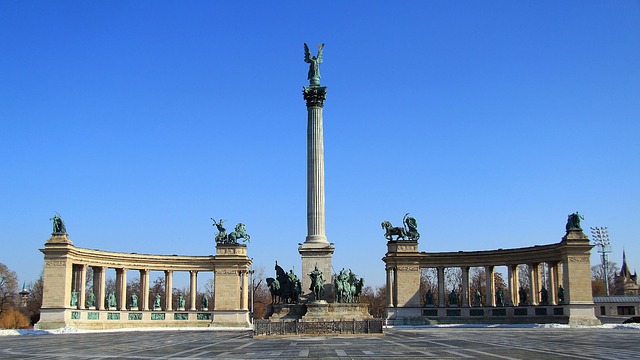 As we push onwards in our action-packed, beer-filled tour of Central Europe’s finest and funnest city, the Budapest Beer Bus heads in a north-easterly direction towards District XIV, or Zugló, where stop number 3 can be found at Heroes Square, located in amongst the grounds of Városliget, or the large City Park to those not too familiar with the Magyar tongue.

Heroes’ Square, or Hősök tere for the ones brave enough to dabble in Hungarian, began its construction in 1896 in commemoration of the thousand-year anniversary of the Magyar conquest of the Carpathian Basin in 1985, and also for the foundation of the Hungarian state in the same year.

At the centre of the square is the Millenium Monument, with seven statues of the Hungarian ‘heroes’ that were chosen to represent Hungarian freedom and national independence. The characters depicted are of the seven Magyar chieftains that led the people to their current place, the most well-known of which is Árpád, who is also considered the father of the nation. At the centre of the monument is the Millenium Column, which rises 36 metres above the square. At the top sits a statue of the archangel Gabriel, who legend has it appeared to St. Stephen in a dream and offered him the crown of Hungary. In the same area stand fourteen figures important to Hungarian history, from King Stephen I to Lajos Kossuth.

As a prominent place for national recognition, Heroes Square has long been used for special events and celebrations, including communist holidays during the Soviet era. At Heroes Square in 1989, 250,000 attended the reburial of Imre Nagy, the former prime minister who led an uprising against Soviet rule in 1956, and was executed two years later.

Heroes Square is most certainly an interesting sight to visit, and also the Museum of Fine Arts is housed in an impressive classical building to the north of the square. This has an excellent collection of art work from such artists as Rembrandt, El Greco, Goya and Titian. Next to this museum is the Palace of Art, another beautiful building which hosts a range of art collections.

So, Heroes Square is a fascinating cultural stop for those with a taste for history and art. Then it’s time to see where the beer bus will take us next!